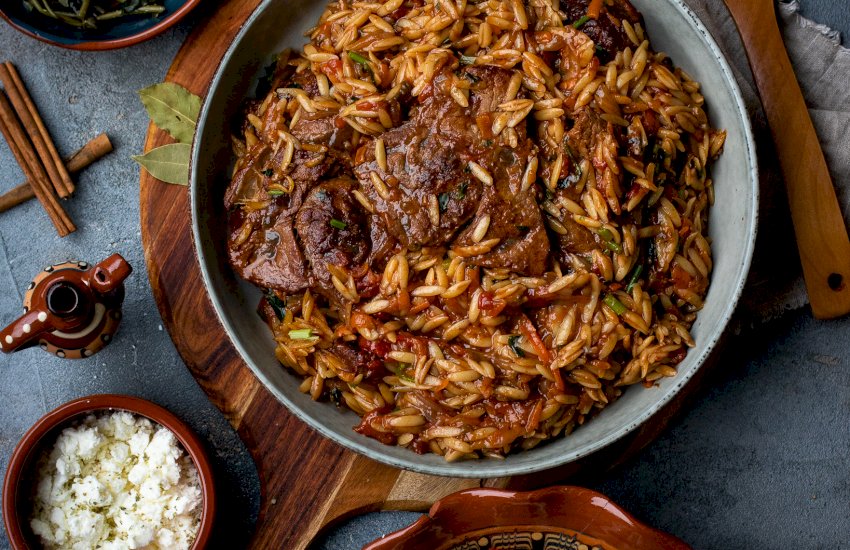 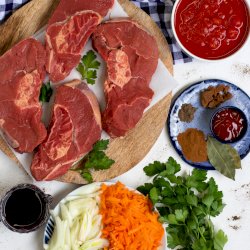 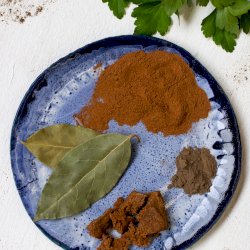 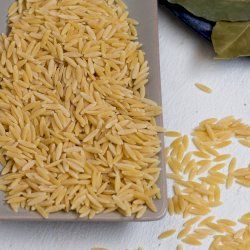 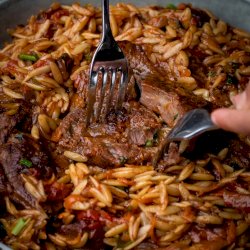 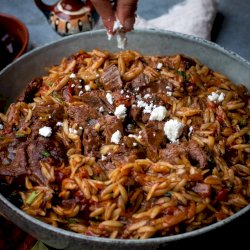 Giouvetsi is a really popular Greek dish made with a spiced red sauce, risoni pasta and meat. What makes it so delicious is the fact that the meat is slow-cooked in spices and falls completely apart. And of course who can say no to short-cut pasta?

What’s in the name?

Giouvetsi, also spelled yiouvetsi, is baked for some time so that the sauce develops and the meat becomes really tender. From the research, the name derives from the Turkish word güveç. Güveç is the name given to the ceramic pots used commonly for slow cooking. A strong example of the influence the Ottoman Empire had on the countries it occupied centuries ago.

Common, years ago, was for families to take their clay pots and trays filled with food to be cooked at their local baker, who would have the wood fire ovens on from early in the morning. The food would cook over a few hours and then the families would gather to enjoy it, a typical Sunday lunch.

Giouvetsi is not necessarily always cooked in those types of dishes but it was frequently done so in the olden days. Nowadays when you mention the word giouvetsi, it’s almost always thought of as the dish with risoni and a type of meat, not so much the process of cooking.

This giouvetsi recipe uses slow-cooked beef and the ideal pieces are chuck steak or gravy beef. There are also versions of giouvetsi with chicken pieces, seafood (e.g. octopus), lamb pieces, or even mince. The recipe below may be used for lamb pieces (lamb shoulder cut in chunks or lamb shanks) but the method for the other variations is different.

The recipe basically follows a method whereby you place all the ingredients in a baking dish and let the oven do all the cooking. However, there are some important points I wanted to make to ensure you end up in risoni that is not overcooked and that the sauce thickens nicely.

1. Cut the chuck steak into smaller pieces so that the beef requires slightly less time in the oven.

2. The beef needs to be lightly fried first before being placed in the sauce so that the fat is rendered. That will add to the flavour of the dish and you won’t end up with pieces of soft fat.

3. Add hot water so that the cooking process may start straight away in the oven.

4. Allow the giouvetsi to rest after you take it out of the oven for 10min covered so that the risoni may absorb the sauce further and the food cools slightly for you to enjoy it warm.

5. Choose a cheese to pair it with such as feta, mizithra, halloumi, kefalograviera or even parmesan.

2. Sauté the onions in the fat leftover in the baking dish until softened and then fry the garlic for 1min. Stir in the rest of the ingredients except the risoni, parsley and cheese. Cover the baking dish with foil and place it in the oven to cook for 2.5 hours.

3. After 2.5 hours, remove the baking dish and increase the oven temperature to 190°C fan-forced. Stir in the risoni pasta and parsley then return the baking dish to the oven uncovered for a further 20min. Take the giouvetsi out of the oven, cover and let it rest for 10min. Serve with the cheese of your choice. 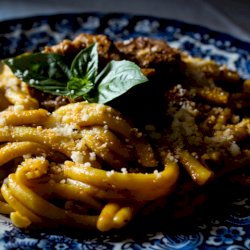 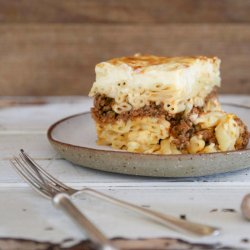 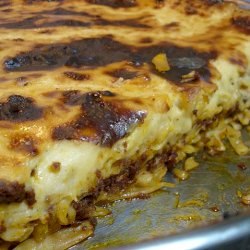 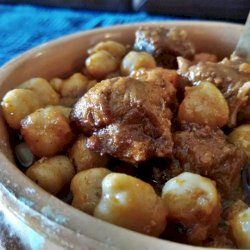