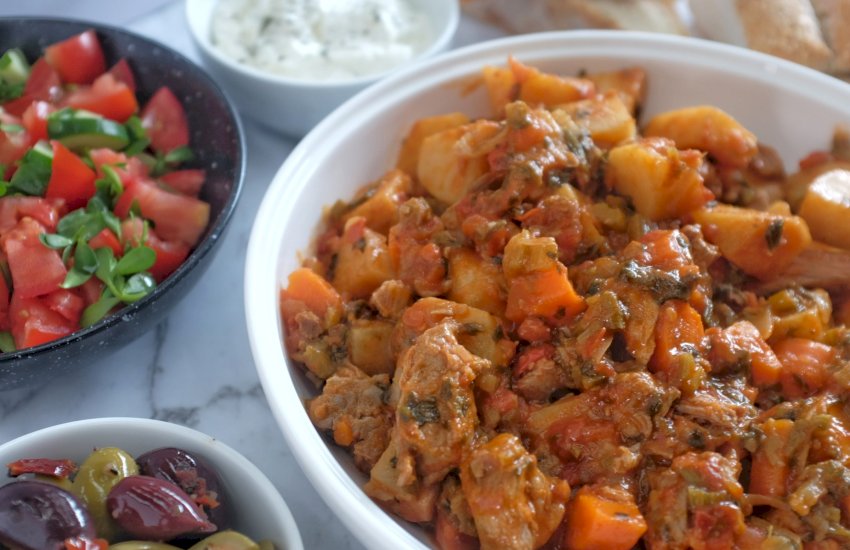 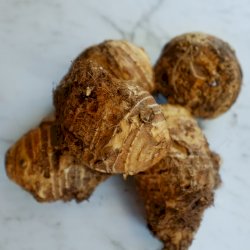 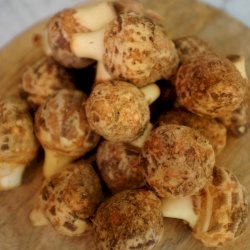 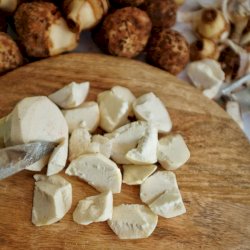 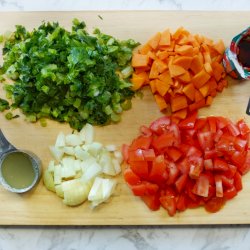 This taro stew or better known as kolokasi is the ultimate Cypriot comfort dish, a meal made with taro and pork in a tomato-based sauce. The pork can be easily substituted with chicken, I usually use skinless chicken cutlets if I do so that it doesn’t dry out. Taro is a root vegetable that is sort of like a potato but has a different kind of consistency once cooked. It also feels a bit slimy once you peel it – a little bit like when you cut okra.

TYPE OF KOLOKASI TO USE

I often miss eating kolokasi but I struggle to find the right type of taro to use. There are a lot of different types when I visit the market here in Australia and most of them are quite fibrous when cooked and don’t have the right texture.

I once found a large taro piece (honestly weighed 2kg on its own) and I was so excited that I would make so much taro stew out of it. Once I cut it open I saw it had purple fibres running through it, which is not what I had seen before. Unfortunately, it did not result in the flavour or texture I am familiar with.

After that, I just stopped looking for the ideal type of taro for the kolokasi. It wasn’t until my father-in-law suggested I get the baby taro (pictured above), although it is a bit more expensive per kg, it produced the best stew I tested. If you can’t find taro readily, you may also place it in an enclosed bag to freeze it and use it another time. You will need to do this though immediately once it is cut so it doesn’t turn brown.

Very rarely do I find the Cypriot type of taro, which has a white stalk on the ends. But if you do find it, I highly suggest you buy it in bulk to store in the freezer after you have properly prepared it.

When my father-in-law grows them and at the Cypriot markets, they are quite larger in size than the ones pictured above. One kg would probably be 2-3 taro pieces in comparison to the 20 or so pieces I found. The fewer individual taro pieces you get the faster it will be to prepare it so you don’t fiddle as much.

The taro has two important requirements that need to be met according to my father-in-law. The first time I ever made kolokasi I didn’t seek his advice; I just followed my instincts and it did not turn out very good. So, I think it is important that these are followed based on my failed attempt.

Firstly, to prepare the taro stew it is important that you wash it well as it is a root vegetable and has a fair bit of soil on it and then dry it really well with a towel. Once you peel it you should not wash it as it will not cook properly and it will become slimier. If there is a bit of soil after you peel the taro then just use a paper towel to clean it off.

Secondly, cutting the taro requires a bit of a technique too since you shouldn’t slice it. Instead, you break off pieces working your way around the taro by inserting a knife into the kolokasi.

1. Heat the ¼ cup olive oil in a large pan or casserole on high heat and add the pork pieces. Cook them enough just to brown on both sides then set them aside while you prepare the kolokasi. I used my deep 30cm frying pan, so all the pork fit and was cooked at once. But if the casserole you use doesn’t fit all the pork, then fry them in batches.

2. Wash the kolokasi skin well to remove the excess soil and dry it very well with a towel. To remove the skin, choose any of the following two options. Option 1: Use a peeler to remove the skin and if there is any soil left on the flesh use a paper towel to clean it, not water. Option 2: Place the kolokasi upright on a chopping board. Then use a sharp knife and cut the skin downwards, but be careful to not remove too much of the flesh. If there is any soil that may have been left behind clean it using a paper towel, not water.

3. To cut the kolokasi do not slice it. Instead, use a sharp knife, insert it into the vegetable and push the knife outwards to break off 3-4cm chunks. How deep you pierce into the kolokasi depends on its size. They will most likely not be equal in size but try to get them as even as possible.

4. You can’t prepare the kolokasi too far in advance because it will turn brown and you can’t place it in a bowl of water like you do with potatoes. Also, be extra careful using the knife as the taro can be quite slippery. I use a cut-resistant glove to avoid any injuries. Otherwise use a towel to hold on to the kolokasi with one hand while you break off the pieces with the other.

5. Heat the pan with 2 tbsp olive oil, add the onions and allow them to soften. Add the rest of the ingredients including the pork you browned but do not pour in the lemon just yet.

6. Bring them to a boil and then simmer for about 90min or until the sauce reduces and the meat is tender. Stir occasionally, with a wooden spoon.

7. Once the meat is ready, pour in the lemon juice, season with salt and pepper to your liking and stir it all well. If you have time let the food rest covered and off the heat to allow all the flavours to combine. Enjoy warm with a fresh salad, yoghurt and definitely bread to dip into that sauce.