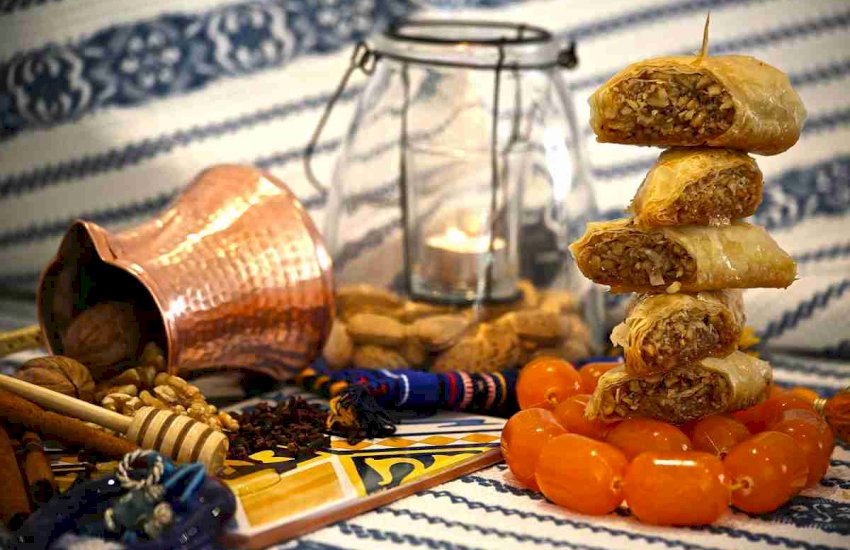 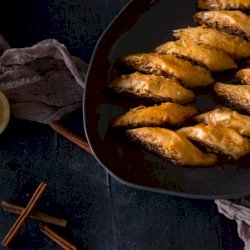 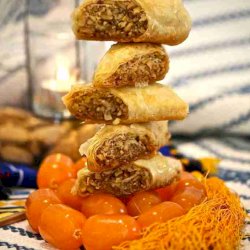 Vasiliki, Rita’s mum, shares one of her signature desserts, baklava. This recipe is a seriously tried and tested one, as Vasiliki has been making it an average of 20-25 times per year for around 40 years!

Vasiliki’s family and friends love her baklava for its perfect balance of pastry, nuts, spice and syrup. It is also loved by the Kali Orexi team, who ‘fought’ over how many pieces they could take home at the end of filming!

Delicious Greek sweet made with crisp layers of filo pastry and nuts, dipped in syrup.

o Combine the walnuts, almonds, sesame seeds, sugar and cinnamon in a large bowl. Mix together with a spoon. Set the nut mixture aside.

o Melt the butter on a medium flame. Remove from the flame and add the oil. Mix together with a spoon. Set the basting mixture aside.

o Remove the fillo pastry from its packaging and lay it flat between two moistened tea towels.

o Roll over the nut-covered end of the fillo pastry by around 2cm and baste the rolled edge with some of the basting mixture.

o Continue to roll the fillo pastry tightly to form a long roll. Place the open edge of the roll at the bottom to avoid the roll unraveling.

o Set the baklava roll aside without over-handling it.

o Place one roll of baklava on a chopping board. Use a sharp, serrated knife to slice the baklava into evenly sized parallelograms of around 3cm in length. Use the blade of the knife or a long, thin spatula to pick up 3 pieces of baklava and place in line onto a greased, shallow baking tray (avoid over-handling the baklava to ensure the nut mixture does not fall out).

o Repeat for the remaining rolls of baklava.

o Place the baking tray on the middle shelf of the oven (preheated to 170ºC) and bake for approximately 45 minutes or until golden brown.

o The syrup needs to be warm when the baklava comes out of the oven so start preparing the syrup about 20 minutes after the baklava has been placed into the oven.

o Place the water into a deep pot over a medium flame and add the sugar. Stir the mixture until the sugar dissolves. Add the cinnamon and cloves. Stir the mixture again. Once the syrup reaches boiling point (is bubbling), boil it for exactly 6 minutes. Add the honey, lemon juice and lemon slice. Boil for another 2 minutes exactly.

o Remove the syrup from the flame and place it on your work surface.

o Allow the syrup to cool for around 5 minutes before you drench the baklava.

o Remove the lemon slice and cinnamon stick from the syrup.

o Remove the baklava from the oven and place it on your work surface.

o Allow the baklava to cool for a couple of hours before eating so the syrup thickens.

o Baklava can keep for up to a week, but good luck resisting the temptation to eat it all before then!