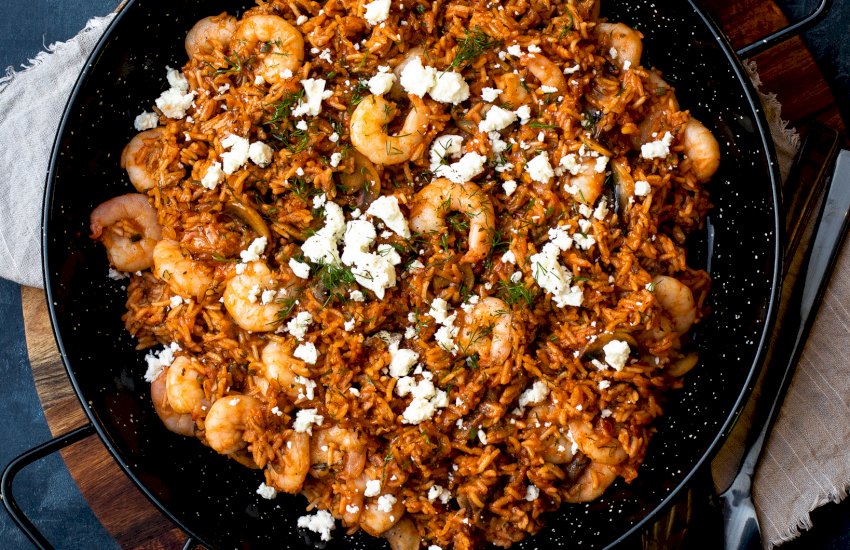 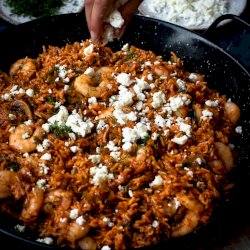 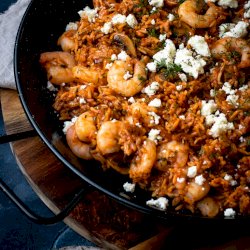 With typical Greek flavours, this rice pilaf with prawns and ouzo is a dish you’ll want to make often I’m sure. The combination of tomatoes, dill, ouzo and feta take the humble prawns to another level. Sweet… Fragrant… Salty… Tangy… Perfect as the main hero of your dinner table or even as a side dish for a dinner party.

Ouzo is a very strong alcoholic drink, clear in colour with an anise flavour. Made using distilled grape must and then flavoured with herbs and seeds. Most commonly aniseeds are always used, which give ouzo its distinct licorice taste. However mastic, mint and fennel are some other additions also.

A huge thank you to Dimitri Palaiogianni, the founder of Zorbabook, for providing me with this further information to add to the blog.

Ouzo has its roots in tsipouro, the alcoholic extract from grapes pressing. The base spirit used to make ouzo is higher in alcohol than the one used for tsipouro and in addition, is flavoured by anise during the distillation process.

Ouzo distillation took off in the 19th century following the Greek independence. In the early 20th century, anise domestic production was not enough for ouzo therefore producers started importing it. The inscription of the anise imported bags was labelled “Anise uso per Marsiglia” meaning “anise to be used in Marseille”. The Greek producers in their effort to stress anise had superior quality, referred to the word “uso” which was adopted as the name of the anise based spirit.

On October 25, 2006, the European Union recognized ouzo as an exclusive and unique Greek heritage product and approved the Protected Designation of Origin label, which prohibits European makers other that Greece and Cyprus from using the name.

One pot of wonder

A quick meal is what we all aim to make, especially mid-week! And this is definitely one of those, made in less than 30min and in one pot. Once you sauté the mushrooms and onion, you can create your red sauce. After that, the rice needs to cook first on its own and then lastly the prawns as they don’t take long. Dill is the perfect herb to accompany the ouzo flavoured rice pilaf with prawns, due to its anise and slight lemony taste. However, you may also replace the dill with finely chopped parsley.

To speed the process and to make it less messy when eating I use prawn meat, which is basically prawns cleaned and deveined. Easily accessible at supermarkets frozen/thawed or even fresh from your local fishmonger.

Rice pilaf with prawns and ouzo

1. Slice the mushrooms and use the extra virgin olive oil to lightly fry them in a medium pot. Stir in the chopped onion, sauté until it softens and then saute the garlic until it becomes fragrant. Pour the ouzo and use it to deglaze the contents in the pot. Pour the tomato passata and hot water in and allow to simmer for 5min.

2. After that time stir in the rice and let it simmer for 13min. Continue to add the salt, pepper, prawns and dill to cook for a further 7min with the lid on. Take it off the heat and stir in the lemon juice. Place a clean towel or paper towel on top then the lid and set it aside to rest for 10min. Serve warm with some crumbled feta and a drizzle of extra virgin olive oil.