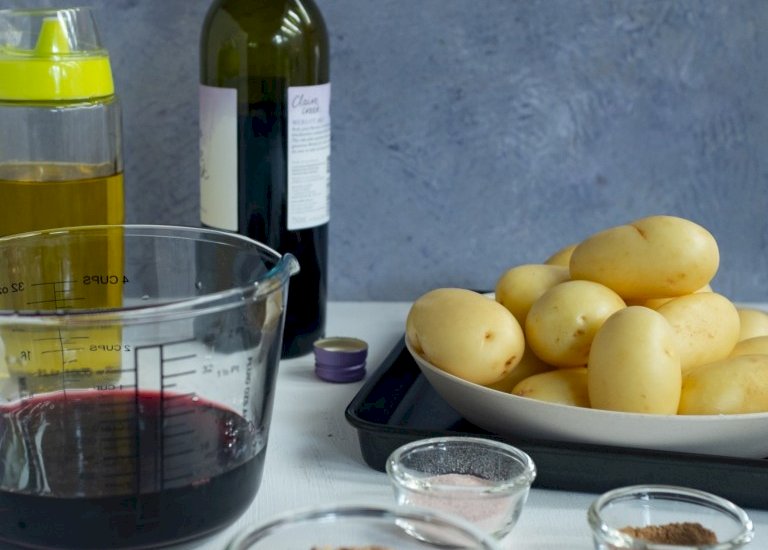 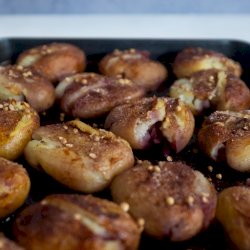 A spin to a classic

These baked smashed potatoes with wine are a spin on a traditional Cypriot dish called “patates antinahtes” (πατάτες αντιναχτές). The name translates to “shaken potatoes” because of the way they are prepared. Typically they are made by frying the baby potatoes as a whole and then shaking the pot they are in until they are smashed/cracked. Then the wine is poured in and lots of coriander seeds are added also.

Red wine and coriander are a typical combination used in Cypriot cooking. There’s particularly a popular recipe called “afelia” which is pork marinated in coriander and wine.

Every time we visit my aunty Skevi in Cyprus and she asks what food I want her to make, this dish is always my request. I just wanted to create a new way of doing it that did not involve using copious amounts of oil and to get the potatoes fluffier in the end. And I promise these baked smashed potatoes will be just that!

1. Preheat the oven to 200°C. Use a baking tray that is large enough to fit the potatoes on half of its area. You will require the extra space later once you smash them.

2. Score the potatoes along their length, on both sides, using a knife. Spread them out on the baking tray and pour in the wine and water. Sprinkle the ground coriander on top of the potatoes and in the liquid. Place them in the oven for 30min.

3. Remove the tray from the oven and pour the remaining liquid in a heat-proof jug/bowl. At this stage, you may place the potatoes on a plate so they don’t tip over while you are pouring. Increase the oven temperature to 230°C.

4. Return the potatoes to the tray and use a masher or the back of a mug to push them down enough to smash and open. At this stage allow the potatoes to air dry for 10min so that they turn out a bit crispier on the outside.

5. Pour 3-4 tbs of the remaining liquid around the potatoes (not on top of them). Just enough to soak for the bottom part of the potato, otherwise it will be too soggy. Then drizzle the potatoes directly with the olive oil, season with salt and sprinkle the crushed coriander seeds.

6. Return them in the oven for a further 10-15min until they are golden brown and cooked through.

Adding a sufficient amount of salt and the type of wine used, makes the difference in how these taste.