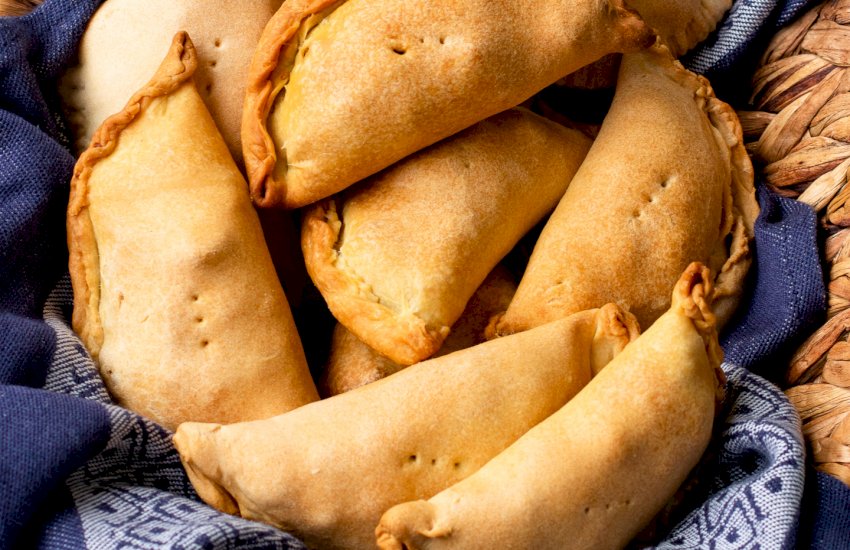 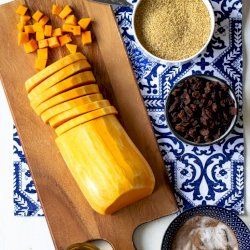 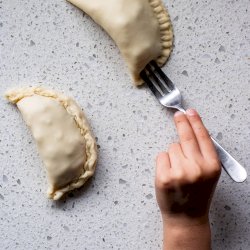 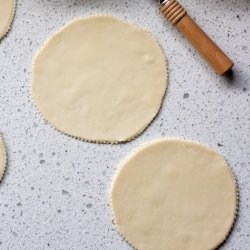 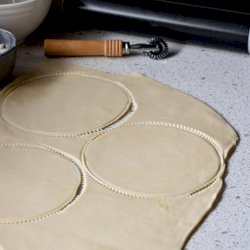 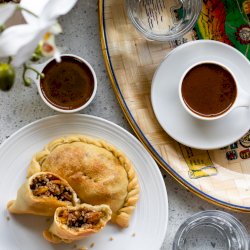 Cypriot kolokotes are traditional pastries enjoyed usually as a snack with a Cypriot coffee or even for breakfast. It is very common to make this kolokotes recipe during the fasting period especially before Christmas and Easter, since they are vegan. They are a turnover style pastry filled with sweet and savoury ingredients that include: pumpkin, bulgur and sultanas spiced with black pepper and cinnamon.

The ingredients, as listed above, really complement one another. A sweet and savoury combination is always a winner in my books. When you prepare the filling for the kolokotes it is important to note that it will need a minimum 3-4 hours to rest. During that time the salt will help the pumpkin release some of its juices and together with the extra virgin olive oil, the bulgur will be rehydrated. Once baked, the pumpkin turns quite soft, so the cooked bulgur and sultanas lend themselves well to the added texture in the filling.

The Cypriot kolokotes recipe below explains the process of making the dough by hand or by a stand mixer. Just one thing to note is before you use your stand mixer, ensure you can fit all the ingredients in the bowl, otherwise split the ingredients and create separate doughs. Extra virgin olive oil is an important ingredient in this dough to give it flavour and structure. The crispy texture comes from the extra virgin olive as well as the lemon juice added, which may be replaced by vinegar. After you prepare the dough it needs a bit of time to rest so that it can be easily rolled. A minimum 1.5 hours – 2 hours is how long I usually leave it.

To shape the kolokotes you need to form circles first, add the filling, fold the dough over and seal them. There are a number of different ways to seal them: from twisting the edges over all around, using a fork to press the edges together or even a large dumpling style cutter (something my father in law usually uses). After shaping the kolokotes, for a more even browning, I tend to brush the pastry with some extra virgin olive oil. I’ve also used the dough and pumpkin mixture to form a larger version of a rectangular pie. Definitely more time efficient, however the filing is not one that would bind well together. Hence the filling, of the pieces without pastry around them, would fall out.

1.     Peel, remove the seeds and cut the butternut pumpkin in small cubes, as similar in size as possible. Place the cut pumpkin with the rest of the filling ingredients in a sealed container. Put the container in the fridge overnight or for at least 3-4 hours. That will allow the bulgur to rehydrate before baking. As often as you can stir the ingredients during that time to ensure the juices are well distributed.

1.     If you make the dough by hand combine the flour, salt and sugar in a large mixing bowl. Then drizzle the extra virgin olive oil and rub it together with the flour in between your hands. That will help distribute the olive oil in the dough. Combine the water with the lemon juice and then pour it slowly in the flour while kneading it. Once all the ingredients are mixed you may place the dough on a clean bench to knead. Knead the dough for at least 10min or until a smooth dough is achieved. The dough will be elastic and slightly sticky but not wet. Form the dough into a ball, rub the surface with some extra virgin olive oil and cover the bowl with a clean towel. Allow the dough to rest for at least 1.5 hours.

2.     If you make the dough using a stand mixer first make sure the ingredients can fit in the size of your mixer bowl, otherwise halve the ingredients and make two batches. Attach the hook accessory and in the mixer bowl add the flour, sugar and salt. On a low speed mix the dry ingredients together for 20 seconds. Then pour the extra virgin olive oil slowly and increase the speed slightly to allow the olive oil to combine well for 2min. Lastly pour the water and lemon juice slowly until all is combined. Allow the mixer to knead the dough for 2-3min on a medium speed, then increase the speed for a further 3-4min. You know the dough is ready when it’s smooth and can easily come off the hook. The dough will be elastic and slightly sticky but not wet. Form the dough into a ball, rub the surface with some extra virgin olive oil and cover the bowl with a clean towel. Allow the dough to rest for at least 1.5 hours.

1.     Preheat the oven to 170°C fan forced. Cut the dough in 6 equal portions and work with one at a time, while the rest are well covered in the bowl to avoid drying. Roll out the dough to a thickness of about 2mm and use a round plate and a knife/pastry cutter to cut out circles. The plate I used was 15cm in diameter and for each of the six dough portion I got 5 circles cut out. Remove the excess dough around the circles and cover them in the bowl with the rest of the dough. Combine the extra dough cut outs together with the rest of the dough, and in the end use them to form more circles.

2.     Before you place the filling, use the rolling pin to stretch out the dough circle slightly. Place 2 heaped tablespoons of the filling in each circle and fold over the dough to form a semicircle. Ensure you keep the bench clean from any bulgur falling out so that it doesn’t pierce through the dough when you are rolling it out. To seal each one, use a fork to press around the edges or twist the edges over. The dough should be sticky enough to help you seal them. Once the kolokotes are sealed use a fork to pierce the top of each one, which will allow the moisture to escape during baking. Place them on a lined tray, with some space between them and then brush some extra virgin olive oil on them.

3.     Bake the kolokotes for 35min or until they are evenly brown in colour. Repeat the steps above until the dough and filling are finished. About 35 kolokotes will be made. After baking place them on a cooling rack and allow them to completely cool down before storing them in an airtight container. The kolokotes are also freezer friendly, sealed in a container or a freezer bag.