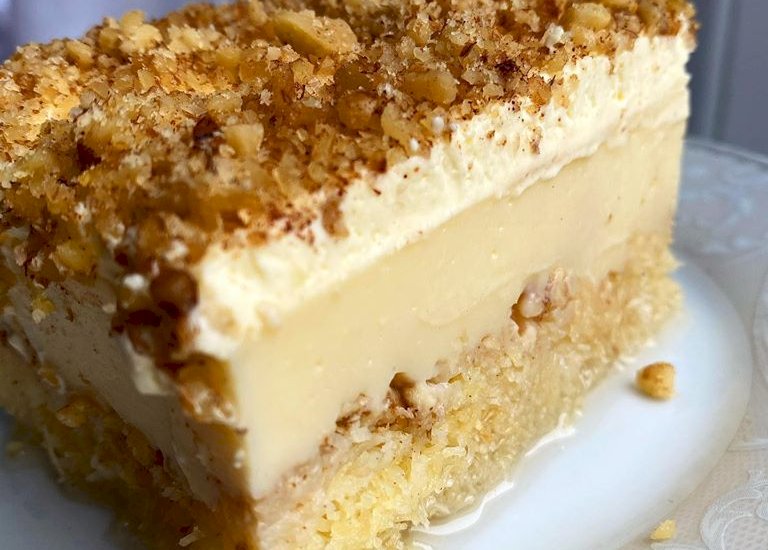 Recipe for a delicious Greek Ekmek Kataifi. It is a layered cake that starts with fillo pastry layer at the bottom which has walnuts mixed in and a sugar syrup drenched over it, followed by a custard layer, and then finally a whipped cream layer which is finished off with some more crushed walnuts.

Yes, it will take some time to make this. You will need a couple of hours to complete all the steps in the process. Each layer needs to be completed before continuing onto the next one.

Syrup
For the syrup, combine sugar, cinnamon, clove, and water in a saucepan over medium heat, stirring to dissolve. Once the syrup reaches boiling point, boil for 6 minutes. Add the lemon juice.

Boil for another 2 minutes. Remove from heat, disregard the cinnamon quill and cloves, and set aside.

Add a little of the milk to the custard powder and cornflour to form a paste. Warm the milk, sugar, and vanilla in a saucepan and add the paste.

Remove the kataifi from the refrigerator and spread the whipped cream all over it with a spatula.

Run the backside of a fork over the whole surface to create lines in the whipped cream. Sprinkle with crushed walnut and cinnamon and serve.