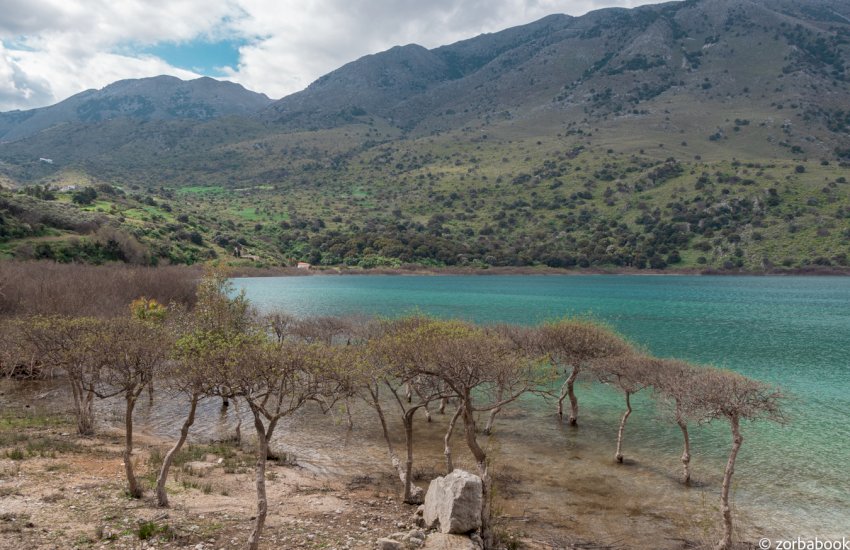 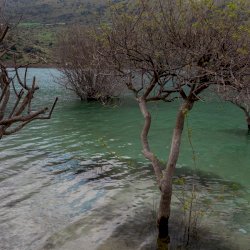 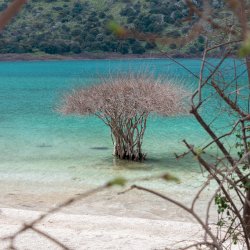 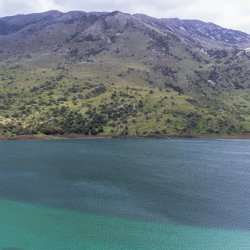 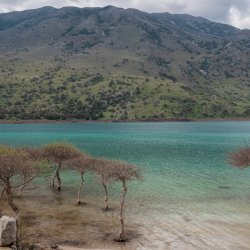 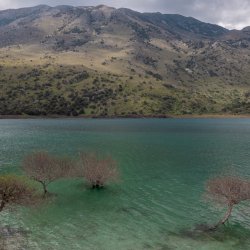 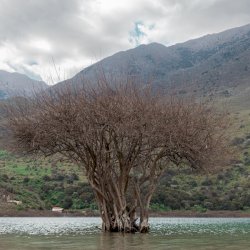 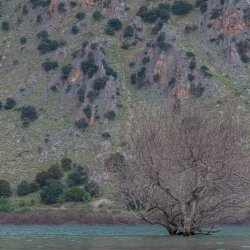 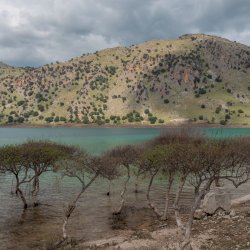 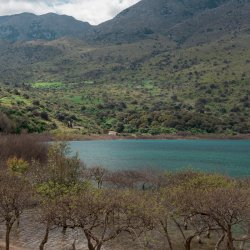 Lake Kournas is Crete’s largest natural fresh water lake, protected under Natura 2000 and a remarkable destination for a relaxing morning or afternoon walk. The tranquility and surrounding beautiful landscape will be appreciated by nature lovers.

It is located 45km east of Chania, 24km west of Rethymnon, 2,5km south of Georgioupolis beach and along with its surroundings constitute an important Greek ecosystem. The trip by car from Chania takes about 40 min and from Heraklion 1 hour and 30 min.

The lake sits at the base of White Mountains – Lefka Ori, created by the accumulation of groundwater coming from the mountains and two natural springs, one called Amati or Mati (eye in Greek).  The lake covers an area of 57.9 hectares with maximum length 1080m, maximum width 880m and maximum depth 22.5 m. The lake environment hosts rare aquatic plants, trees, birds and is well known for its eels. The lake’s dark water colour is due to the algae at its bottom and have inspired locals to create a lot of myths.

In antiquity close to the lake was Korion settlement and the lake was known as Korissia, after a temple in the area dedicated to Goddess Athina the Korissia. The name Kournas is believed to come from the Arabic word kurna which means the place where water is collected.

The best time to hike around Kournas lake is May until mid-September. During winter and spring, the water level is higher with dense vegetation on the banks making the paths around the lake inaccessible. During summer the sun dries the lake and small sandy beaches are formed as the water surface reaches lower levels. You can explore the length of the lake by renting a paddle boat and look out for eels, dragonflies, terrapins, water snakes, herons, cormorants and feed the ducks along the lake banks.

You can admire Lake Kournas breathtaking views from the surrounding hills, as well as from Kournas village a few km far from the lake, with old houses and beautiful natural surroundings.

Coast beaches you can visit in the wider area are the 10 km long sandy beach of Georgioupoli, Episkopi, Kournas, Kavros, Almirida, Kalives, Kolatsos.