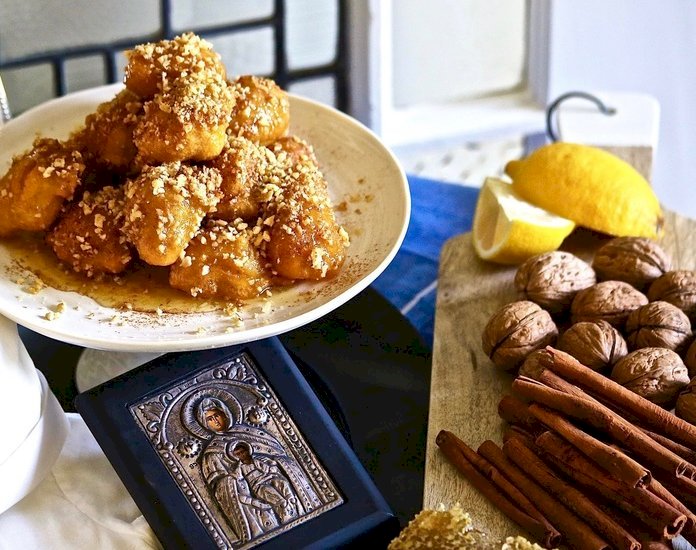 The 12th of December is the celebration of St Spyridon (Agios Spyridonas) the patron Saint of Corfu island. The roots of this traditional celebration date back to Venetian times.

On the 11th, the eve of the holiday, a special version of “loukoumades”, bite-sized fluffy and crispy balls served with honey and cinnamon, are prepared by every household, known as “the Saint’s pancakes” – Tiganites t’agiou. Some locals claim that the tradition goes back to Roman times who prepared a similar sweet called “scribita”.

According to the tradition the people of Corfu, on the 11th December, make the vegioni, which is keeping vigil in reverence of the Saint in the church. In order to sustain the tiredness and lack of sleep, they eat tiganites.

Tiganites recipe is simple. A dough made of flour, water and yeast is prepared and left to rise, then bite-sized balls are deep-fried to golden and served with honey and cinnamon. Street stands and shops serving the tiganites compete who has prepared the best ones and the “kantounia” (local name for alleyways) are filled with the tempting and mouthwatering smell of the fresh tiganites.

Saint Spyridon is the patron Saint of Corfu island born in Askeia, Cyprus c 270 and became the Bishop of Trimythous (Tremetousia) in the district of Larnaca where he died c 348. He is also the patron saint of potters and the city of Pireaus.

According to the word of mouth tradition, in 1456 after the fall of the Byzantine Empire, the relics of St Spyridon were brought to Corfu from Constantinople by Greek monk Georgios Kalochairetis and were kept as property of his family. His daughter Asimia married one of the scions of the Voulgari family in Corfu and the Saint’s relics were given as part of her dowry.

The relics of St. Spyridon were housed in a private church owned by the Voulgaris family, located in the San Rocco Corfu city suburb which however had to be demolished when the outer city fortifications were built by the Venetians to protect the citadel after the first great siege of Corfu in 1537 by the Ottomans. In the 1580s, after the demolition of the private church, the saint's remains were moved to their present location in a new church, built within the city fortifications in the Campiello old town district. The bell tower of the church is similar in design to the contemporary Greek Orthodox church of San Giorgio dei Greci located in Venice.